In a neighborhood near you: Yale’s new provost 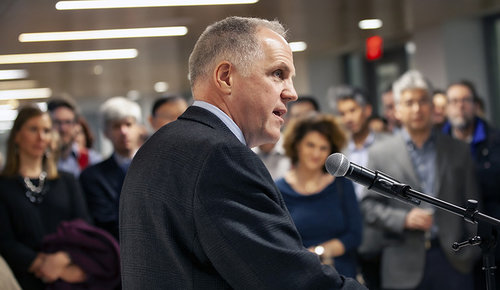 Speaking Nov. 15 before a crush of colleagues at the Poorvu Center for Teaching & Learning, Strobel invoked a metaphor inspired by Fred Rogers, the late longtime host of the PBS show “Mister Rogers’ Neighborhood,” describing the university as constellation of neighborhoods.

In 25 years at Yale, Strobel said, he’s been a member of many communities — academic departments, centers, institutes, and the West Campus, to name a few. He knows there are many others.

“I assure you that I am committed to learning about the ‘neighborhoods’ that I don’t know,” he said after a warm introduction by outgoing Provost Ben Polak.

Strobel, the Henry Ford II Professor of Molecular Biophysics and Biochemistry and vice provost for science initiatives, pledged as provost to be an eager student of Yale as well as a leader of it, and urged a culture of curiosity and inclusivity.

Named Yale’s next provost on Nov. 6, Strobel takes up the job Jan. 1. Polak will return to Yale’s economics faculty. The provost is the university’s chief academic and budgetary officer.

Polak called Strobel “the best person to be provost at Yale,” hailing him as builder, a leader, and a person with “great vision and judgment” who is courageous, fair, firm, and ethical.

“He has the uncanny ability to bring people together,” Polak said, adding, “He gets stuff done.”

The high regard was mutual.

“Thanks to [Polak] and others who have come before me in that role that I’m about to take,” Strobel said, “I can say confidently, ‘It’s a beautiful day in this neighborhood.’”