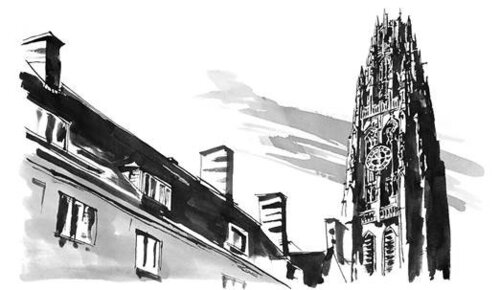 Wednesday, April 21, 2021
On Tuesday, a jury found former police officer Derek Chauvin guilty of the murder of Minneapolis resident George Floyd. Chauvin’s actions and Floyd’s death in May 2020 prompted nationwide protests against police brutality and racial injustice, which forced the United States to reckon with these long-simmering issues.
Yale President Peter Salovey issued a response in support of the landmark verdict.
“George Floyd’s murder was an indictment of our nation’s failure to address anti-Black violence and racism, but today’s verdict was a positive step forward for our country,” President Salovey wrote. “I am relieved that a jury of Derek Chauvin’s peers found him guilty of George Floyd’s murder, but I am no less heartbroken over the number of Black lives that have been cut short due to police violence. We must continue to focus our energy on addressing racism, injustice, and abuse of power by the police and others in positions of public trust and authority.”
Deans from around the university also issued community statements supporting the verdict, and echoing the call for continued action and progress on violence and systemic injustice. These statements are excerpted and linked to below:

“…Though I am relieved that a perpetrator of racist violence has been held accountable, achieving justice will take a lot more work.”

“We continue to reckon with the relentless and lethal mix of gun violence, racial violence, and a pandemic that grows more complex as it also wanes with mass vaccination.”

“This verdict, so unequivocal and delivered so swiftly, has offered a moment of relief because the police officer responsible for his death was held accountable. To a nation despairing of ever seeing such an outcome, this verdict has also offered hope.”

“George Floyd should be alive today. While the verdict provides a critical measure of accountability for one police officer, we know there is much work to be done to achieve true justice. We take this moment to reflect and share our collective relief, pain, frustration, and profound sadness.”

“The justice system was on trial as well as a particular individual.”

Yale School of the Environment

“It is our responsibility to drive our society to do better—our friends’ and colleagues’ lives are at stake.”

“On this occasion, the defendant did not walk away without punishment for a despicable crime against a person of color.”

“This event and the many others that have been highlighted over the past year have put a necessary spotlight on the centuries-long effort to dismantle racism in the U.S. and abroad.”

“While the legal system has held George Floyd’s killer to account, the tragedy of George Floyd’s death and the many devastating incidents that have followed further expose the country’s failure to confront racial violence and the tenacious hold that structural racism has on our society.”

“Regardless of the outcome of the trial, we remain dedicated to the larger project of doing all we can to help eradicate racial bigotry and mistreatment in society, including the racially-charged episodes of police misconduct that remain a lamentable reality in the lives of many of our fellow citizens.”

“As we process this evening’s verdict in the Derek Chauvin trial, the School of Medicine stands united with all members of our community in championing humanity in the treatment of all Americans.”

“Our nation, because of the courage of 12 people who listened with their hearts and minds, took a small step forward toward seeing, hearing, and giving voice to those among us who have been disenfranchised by America’s historic struggle with racism.”

“…This verdict is not a punctuation mark; it is a reminder that justice can be precarious for Black people subjected to police violence.”

“This trial was one step towards justice, albeit a small one given the magnitude of the remaining work that needs to be done.”