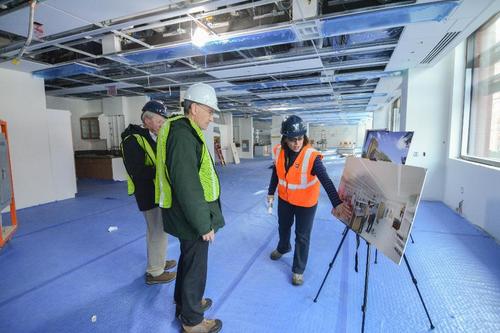 Every year around this time, I offer a brief update on the major building projects going on around the university — a peek behind the blue fences, so to speak. It gives me the opportunity to indulge in two of my favorite topics, architecture and history.

This is a particularly interesting moment in Yale’s recent period of physical transformation, with three of our biggest projects slated for completion in the next 18 months. A few weeks ago, I had the chance to visit these three sites — the Schwarzman Center, 320 York Street, and the Yale Science Building — to see the progress first hand and learn from the experts what each project entails. A small group of us, wearing hard hats, eye protection, and neon safety vests, gaped at the cavernous refurbishment-in-progress of Commons and the new spaces that will be constructed underneath the main floor. We descended to 20 feet below the original foundations of the Hall of Graduate Studies, into the excavated space below the courtyard that will house a new auditorium and film screening room, to crane our necks up toward the newly named David Swensen Tower. We looked out from the atrium lobby surrounding the future O.C. Marsh Lecture Hall onto the soon-to-be-transformed Sachem’s Wood on Science Hill. And at each stop along the way, we learned about the hidden layers of history that are emerging — and being preserved — at each of these buildings. You can see parts of our tour by viewing the slide show posted on YaleNews.

The Schwarzman Center originated as Yale’s bicentennial buildings, a Beaux-Arts classical complex designed by Carrère and Hastings and constructed at the turn of the 20th century to celebrate the university’s 200th birthday in 1901. The sacrifices of generations of Yalies are commemorated in the Alumni War Memorial colonnade on the south side of Commons, dedicated in 1927 as a tribute to Yale men who died in World War I, and in the luminous interior of the Memorial Hall rotunda. The $162 million project will create a vibrant, state-of-the-art hub of campus life, and will include a meticulous restoration of the memorial cenotaph on Hewitt Quadrangle. A team from Dimeo Construction has been hard at work, removing the sagging, 13,600-square-foot terrazzo floor of Commons to prepare for construction of the student gathering and performance spaces that will fill the Schwarzman Center’s subterranean space. The terrazzo will be replaced so that the Schwarzman Commons of 2021 — a venue for large dining and cultural events — will look and feel much like the Commons dining hall of 1901, in all the best ways. On the day I was there, seeing two floors at once, the Hogwarts-like hall looked even more massive than I had ever realized. (The image inset above gives you a sense of its magnitude.)  The reborn facility is scheduled to open in fall 2020.

The landmark building at 320 York Street, designed by James Gamble Rogers in the collegiate gothic style, opened in 1932 as the Hall of Graduate Studies. Over more than 80 years, Yale graduate students lived (somewhat monastically) in HGS’s humble rooms at the start of their academic careers, while many of the greats of our humanities faculty had their offices in the building. Today, as part of a $162 million renovation, it is metamorphosing into a humanities quadrangle at the heart of campus. The company of Skanska USA have dug an enormous hole where the HGS courtyard used to be, carving out space for the new lecture hall and screening room that will underpin the building. More immediately, a very literal kind of underpinning is already at work: the construction team are injecting new layers of foundation underneath the tower. (You can see the striations around the perimeter of the courtyard in the panoramic photograph above.) Back at ground level, the old, somewhat awkward HGS dining hall is being ingeniously transfigured into three classrooms. The hall’s common room has been retained in all its splendor — did you know that the “wood” paneled ceiling is in fact painted plaster? Yale’s new home for the humanities will open in the summer of 2020.

The Yale Science Building, in one respect, offers a striking contrast to Schwarzman, 320 York, and many other buildings on our campus. Rather than standing out, it was designed by César Pelli to fit into the larger ecosystem, the fabric, of the buildings around it. This $283 million project, also the work of Dimeo, will quietly reshape Science Hill at the same time that it reshapes the possibilities for science at Yale. This, after all, is the site of generations of groundbreaking discovery. The much missed and beloved Sterling Professor of Molecular Biophysics and Biochemistry, Tom Steitz, had his lab in J.W. Gibbs Laboratory, whose footprint the new building now inhabits. The Yale Science Building will be anchored by the 500-seat O.C. Marsh Lecture Hall, and by a pavilion that will be a congregating space for all of Science Hill (and all of campus). The building’s greenhouse — manufactured in Belgium and stick-built directly onto the rooftop — is already in full evidence to anyone walking past. (The glass for the greenhouse, from Poland, will arrive this month and will be installed by local glazers.) Other elements of the facility, from the insectary to the shared underground instrumentation space, are less visible to the outside world. The upper floors will contain open-plan labs, some of which will look out on two 150-plus-year-old white oak trees on the building’s eastern side that have been carefully protected during the construction, while others will have views over the pavilion and the newly landscaped plaza to the building’s west. On the day we were there, the expanse was shrouded in snow, covering the sunken courtyard that will bring natural light into the Center for Science and Social Science Information below. This project will be finished and the building ready for occupancy in August of this year.

The Schwarzman Center, 320 York Street, and the Yale Science Building represent three parts of campus and three facets of our community, student life, the humanities, and the sciences. They also chronicle three distinct phases of Yale’s history, stretching from the university’s bicentennial to its fourth century. And soon we will all be able to visit them — no hard hat required.