Campus Building Projects: A Look Inside 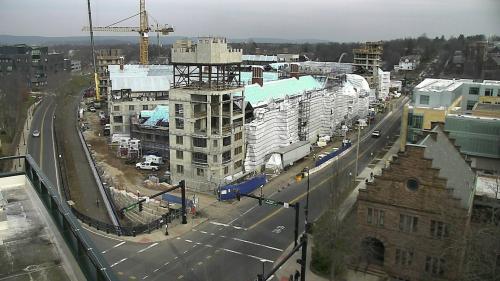 Each year I try to update you on some of the building projects you see as you walk across campus. The cranes dotting the Yale landscape are a visible reminder of how many are now in progress. On any given day during the last year, the construction site for the new residential colleges has had anywhere from seven to 11 of them on site. Last fall, Science Hill had one so tall that it dwarfed Kline Biology Tower. And from the Beinecke Library to Hendrie Hall, the cranes are a visible manifestation of the work under way to transform our campus and our community.

From the outside, these sites — and the structures they represent — are as varied in architectural style and day to day use as they are united in a sense of purpose. The five major projects that will finish in 2016 include two of Yale’s great modern buildings (the Beinecke, a Scrabble board in marble, granite, and glass that first opened in 1963, and the Center for British Art, Louis I. Kahn’s last masterpiece, completed in 1977 and scheduled to reopen in May); a Renaissance Revival structure that originally housed the Law School (Hendrie Hall, with its Venetian palazzo façade dating to 1894); a Gothic masterpiece that in recent years had become best known for its dripping ceilings (Sterling Chemistry Lab, built in 1923); and a “bunker” that until five years ago housed a nuclear particle accelerator (Wright Laboratory, opened in 1966, which will be reborn as a state of the art space for physics research). All of these will be finished in time for the start of the fall semester.

But the buildings’ very different looks belie a common strategic thread. Each is designed to underpin our education and research mission. Each will provide carefully conceived space for courses, lab work, and practice. And each is informed by our overarching goal to be a leader in the artistic disciplines, in scientific discovery, and everywhere between. Yale is a place where students of cell biology are also concert cellists, a place where we believe that the world should not be divided into those who study conductivity and those who study conducting. It should be united by those who study both.

To look inside the building work is to see, at each site, a miniature — if temporary — community. At Hendrie Hall, over 100 tradespeople are working long days to ready the transformed facility for its début. And at Sachem and Prospect Streets where the new colleges are taking shape (faux chimneys and all), scaffolds and weather-proof casing mean that even with snow on the ground work can proceed uninterrupted. Immediately behind the tarps, more than 45 masons are busy building the brick and stone exterior walls, and glaziers are now starting to install windows. Within the buildings, over 350 workers are installing plumbing, electrical, and mechanical systems and making the spaces ready to receive their final floor, wall, and ceiling finishes. The structural frame of the buildings is now largely complete, and the omnipresent cranes are beginning to be removed. Within six weeks only one of the large yellow tower cranes will remain, and in just 18 months the buzz of eager new students will replace the buzz of construction.

But it is far more exciting to “look inside” the finished projects, even if for the moment we can do so only in the mind’s eye. The renovated Beinecke Library will have an expanded emphasis on teaching space and greater access to the rare treasures it contains. The renewal and reconfiguration of the Yale Center for British Art will mean that the center’s public spaces — including the galleries and lecture hall — are more inviting and available to all. Hendrie will be the flagship of the newly christened Adams Center for Musical Arts complex, where performance and rehearsal space, a recording studio, and common gathering areas will draw musicians from all parts of the university. In SCL, students will mix and study chemical reactions on one floor while their peers probe the nature of biology and physics on another. In Wright Lab, physicists will conduct neutrino and dark matter research in new purpose-built spaces. And in the two new residential colleges, hundreds of undergraduates — students we could not have admitted without the additions — will live, study, discover.

Of course these are just a handful of the facilities projects taking place, and planned, across our campus, and I will continue to update you on many of them in the years to come. They range from the institutes at West Campus to graduate and professional student housing, from the humanities project in the Hall of Graduate Studies to the Schwarzman Center, from the new cross-cutting science building that will transform Science Hill to the unified Center for Teaching and Learning that will move into its new home on York Street next year. Throughout, the president’s seven key goals are mirrored in what we are building.